The NanoTriboTest module enables rapid high-cycle linear reciprocating nano-scale wear tests to be performed with track lengths up to 40 mm. Reciprocating contacts occur in a wide variety of practical wear situations such as (i) comb drives in MEMS (ii) hip joints and (iii) electrical contacts. In optimising materials for improved durability in these contacts it is important that the contact conditions (e.g. sliding speed) can be reproduced. 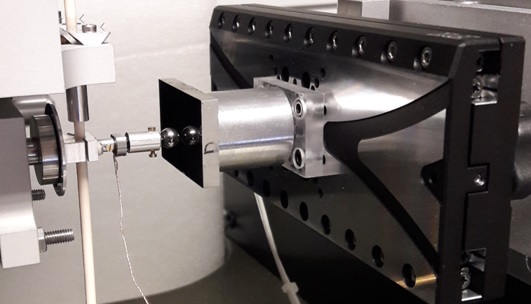 The design of the loading head on the NanoTest Vantage provides a high level of lateral rigidity giving the stability to run wear tests for extended duration. By being able to combine data from different test techniques it is possible to obtain more detailed information about failure mechanisms.

The NanoTriboTest module can be used in conjunction with the Electrical Contact Resistance (ECR) module.

Reciprocating wear tests are also possible with the nano-scratch and nano-fretting modules but there are key differences between them. A comparison of typical experimental conditions for each type of test is shown in the table below: 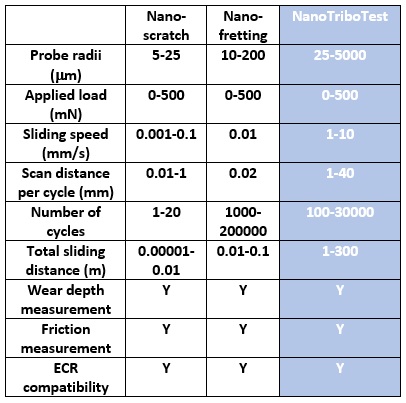 In the nano-scratch test the contact pressure is typically high (>> 1 GPa) and the test can be dimensioned so that the peak stresses are placed in the vicinity of the interface.

In the nano-fretting test the stresses are typically lower but the small track length means that total sliding distance is relatively low, and the transition from fretting/partial slip to gross slip can be studied.

For the NanoTriboTest the sliding speeds are much greater allowing much larger sliding distances. Maximum track length = 40 mm.

Nano-scale studies of the wear resistance of metallic materials under reciprocating sliding conditions are important to improve our understanding of their performance in mechanically loaded sliding contact, for biomedical applications. 500 cycle tests with the NanoTriboTest module were performed on highly polished medical grade Ti6Al4V and 316LVM stainless steel sliding over a 1 mm track at 0.5 mm/s. The normal load varied in the range 10-500 mN and the test probe was a spheroconical diamond of 25 mm end radius. 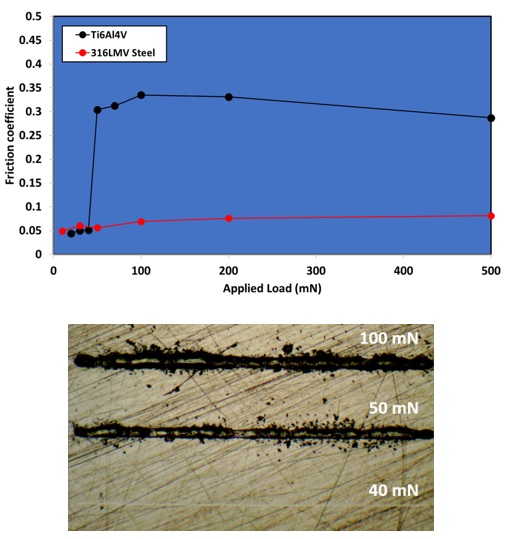 Stainless steel showed ductile response throughout the load range but the Ti alloy was more brittle at higher load resulting in a transition to higher friction and wear during the test.

500 cycle tests at 2-100 mN with a diamond indenter with 25 µm end radius were performed over 1 mm track length at 0.5 mm/s. Under these conditions the multilayer DLC was resistant to wear at 2-50 mN but failed during the test at 100 mN. 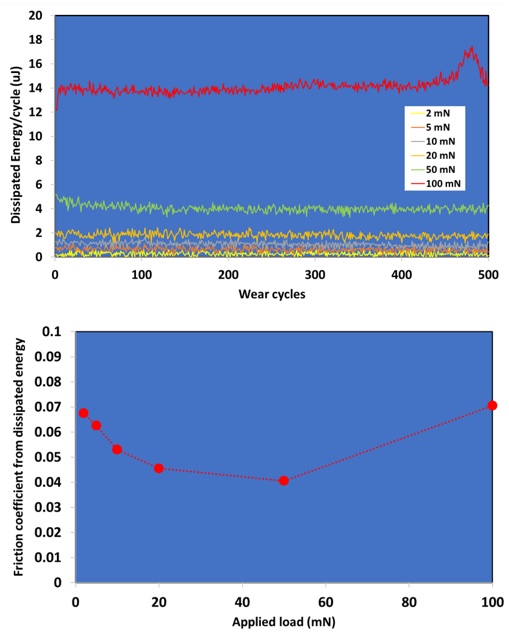 At low load the high surface roughness increases the friction. At higher load the asperities are more effectively ploughed out and the friction decreases. Total failure occurred during the test at 100 mN, resulting in film delamination outside of the scratch track.

Electrical contacts need to display low and stable resistance. Even single spikes in contact resistance can result in data loss that can be particularly important in safety-critical applications. Damage can occur with tribo-oxide formation and, to mitigate this, noble metals such as gold or silver and their alloys are commonly used to extend the endurance of the sliding electrical contact. The durability of electrical contacts can be studied by fretting, or more conveniently under the full sliding conditions in the NanoTriboTest which can result in accelerated wear, e.g. to due to the break-up of protective oxides. In the following examples the endurance of different electrodeposited alloys has been evaluated using the NanoTriboTest in conjunction with the ECR module.

An electroplated gold alloy disk was worn at 10 mN by a 1 mm radius steel ball at a sliding velocity = 2 mm/s and track length = 5 mm. Tests were feedback controlled with a fixed current of 0.5 A. Under these conditions the gold alloy disk showed low endurance typically failing after ~60 cycles. In these tests the electrical and tribological behaviour was intimately connected. Changes in contact resistance and dissipated energy as the test progressed were strongly correlated and enable the wear mechanism to be investigated. Wearing through of the top layer resulted in electrical failure and higher dissipated energy. Typical examples are shown in the figure below. 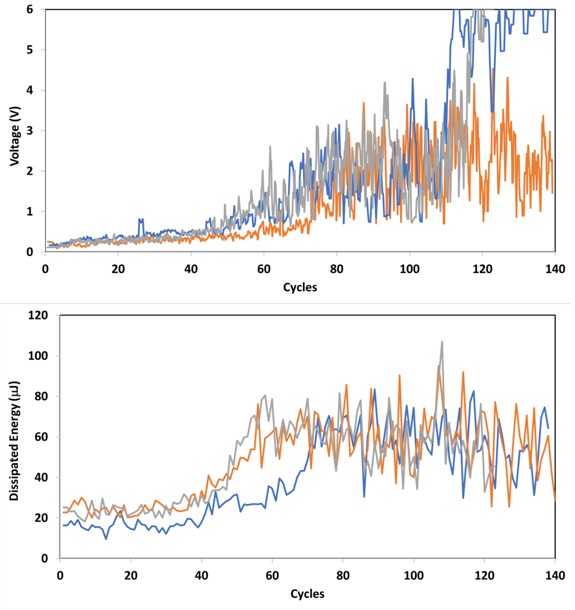 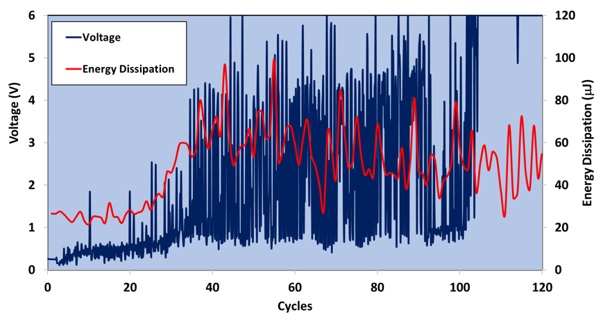 It is clear that the energy dissipation increases markedly at the point at which the baseline electrical voltage starts to increase (~25 cycles) resulting in rapid total failure after ~35 cycles.

Noble metal-noble metal contacts displayed much longer endurance than gold vs. steel. An example of gold disk sliding against a gold alloy connector at 20 mN and sliding against 1 mm radius steel ball at 10 mN is shown in figure 7.

Silver alloys similarly show excellent durability in sliding vs. noble metal connectors. Sliding tests were performed on Ag alloy electrical connectors with different alloy composition and geometry against Ag alloy disks at 50-200 mN, with the set point current being 0.1-0.5 A. Under these conditions they displayed high endurance with some isolated failures in a 35000 cycle test taking 46 hrs.