Popular methods for obtaining properties such as hardness, modulus and H/E as a function of indentation depth include:

Several researchers1 have called into question the continuous stiffness measurement method because the measured hardness value of ductile metallic materials, especially at depths less than 200 nm, may be inaccurate. This is due to the added energy associated with the oscillation which assists dislocation nucleation. There is inherent risk in trying to determine properties by oscillation as the dislocation density of the material is completely changed.

Provided the test instrument has very good thermal stability – as with Micro Materials systems – nanoindentation experiments can simply and easily be performed as rapid depth-profiling (rapid multi-cycle) tests. This enables effective hardness and modulus determinations as a function of depth without risk of altering the surface of soft materials by imposing an oscillation.

The rapid depth-profiling technique is well suited to testing a wide range of sample types including hard and soft coatings, ceramics, glasses and advanced alloys. Typical load-unload cycles can be around 1 s duration, with tests commonly involving 50 or 100 cycles to progressive greater peak loads or penetration depths.

The international standard for nanoindentation, ISO14577, notes that the elastic modulus measured at a relative indentation depth (= contact depth/coating thickness) of 10% can be a poor estimate of the coating modulus when there is a large elastic mismatch between coating and substrate.

The ISO method of extrapolating to zero depth to obtain the coating modulus free of substrate influence is a standard feature of the NanoTest analysis software. An example on a hard and stiff coating on a lower modulus substrate is shown in figure 1 below. For the 1.1 micron thick TiFeN coating the measured modulus contains a significant contribution from the lower modulus Silicon. 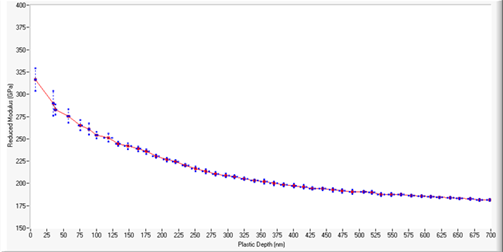 It is also possible to use the test to precisely determine the depth at which the plastic stress field is no longer fully within the coating and substrate plasticity is contributing to the measured hardness. In the 50-cycle load-partial unload test on a 2 µm DLC film on a silicon wafer shown below there is a marked inflexion in the data (at around 37 mN). 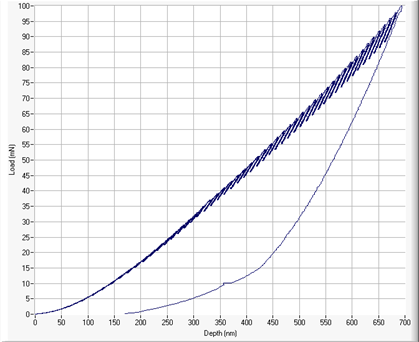 When combined with the 500 mN load range available in the NanoTest Vantage, another advantage of the rapid depth profiling is the ability to measure the full system response for multi-layered and graded coating systems.

Ion implantation is becoming a popular technique for simulating the radiation damage of materials exposed to the severe environment of a nuclear reactor. Small samples can be irradiated and do not become radioactive. However the depth of penetration of the ion-beam damage is limited and so nanoindentation is needed to assess the mechanical property changes induced by the irradiation.

Figure 3 below shows the results of 10 repeat rapid depth-profiling tests on an untreated steel sample and the same material after its surface has been subjected to N-ion implantation. Although there is no change in modulus, the irradiation has induced defects which have hardened the material, particularly below 100 nm.

In many applications the mechanical properties of coatings at elevated temperatures can be much more relevant than those at room temperature. This may be because of frictional heating in contact, as in a cutting test, or in high temperature applications in auto- or aero-engines. The excellent thermal stability of the NanoTest at high temperature (with its patented dual active heating of indenter and sample ensuring isothermal contact and minimal/no contact thermal drift) enables rapid depth-profiling tests to be easily carried out with the NanoTest high temperature nanoindentation module.

Rapid depth-profiling measurements at elevated temperature show the same high precision as those at room temperature. The example below illustrates how the elevated temperature properties of very thin DLC films on glass can be used to improve coating deposition processes. The elastic modulus of the 80 nm DLC does not vary significantly with temperature between 25 and 200 C (as expected) but the 40 nm coating was less thermally stable suggesting a deposition problem in the thinner film.